The energy challenge demonstrates the excessive use of energy in contemporary world. Most of it is now produced by burning mineral materials, mainly oil, causing global environmental problems, such as inversion of climatic balance and acid rain. At the beginning of the 21st century, humans are called upon to replace mineral fuels with renewable alternative forms of energy.

Solar energy
The only inexhaustible source of energy is solar energy, which could meet the majority of energy requirements in sunny countries like Greece. Nowadays, exploitation of solar energy is done with the use of solar heaters or solar commutators. This fan is driven by the energy produced by a solar commutator. By placing each of the clouds between the light source and the solar commutator, visitors see what happens. No solution is unconditional. Therefore, every form of energy has advantages (on green background) and disadvantages (on red background). For example, even though solar energy has mild environmental impacts, the necessary technology is still costly.

Wind energy
Humans have been using wind energy for thousands of years, mainly in sea transports. Making use of modern technology, we now capture wind energy and transform it to electricity. Today, wind farms represent the modern electricity production plants. One of their significant advantages is the relatively economical and fast construction – however they cause noise pollution and energy provision is not constant. In Greece, there are wind farms operating in Crete, Chios and Andros.

Biomass energy
Biological material of vegetable or animal origin, biomass, has been used ever since ancient times as fuel for heating, cooking and lighting. Today, materials such as wood, straw and coal are used in developing countries. This is how Brazil meets 50% of its energy requirements.

Geothermal energy
Heat from the interior parts of earth may be used for the production of steam, for heating or for electricity. Geothermal energy may have a positive input in countries where access to internal earth heat is easy, such as the Philippines.

Nuclear energy
A form of energy that defines modern times is nuclear energy. Today, the breakdown of uranium atoms nucleus is used for energy production. Nuclear fusion – which is still at experimental stage – may be the energy of tomorrow. Nevertheless, the Chernobyl accident is an illustrative example of the danger implicated in the use of nuclear energy. Today, the unfavourable impacts of radioactivity leakage throughout Europe are unfortunately still evident.

Hydraulic energy
Humans have exploited the power of water ever since ancient times, using it in agriculture. Today, the use of hydraulic energy for the production of electricity could help meet a significant percentage of energy requirements at a global level. We may extract energy by constructing dams, from tidal streams and from waves. The exhibition presents the dam of Assouan along with its connected environmental impacts: loss of water in the nearby lake Nasser, disturbance of marine life, corrosion of rocks with adverse consequences to historical monuments of the area. There are also negative impacts for health: irrigation channels are carriers of various diseases that threaten the local population, such as trachoma, malaria etc.. 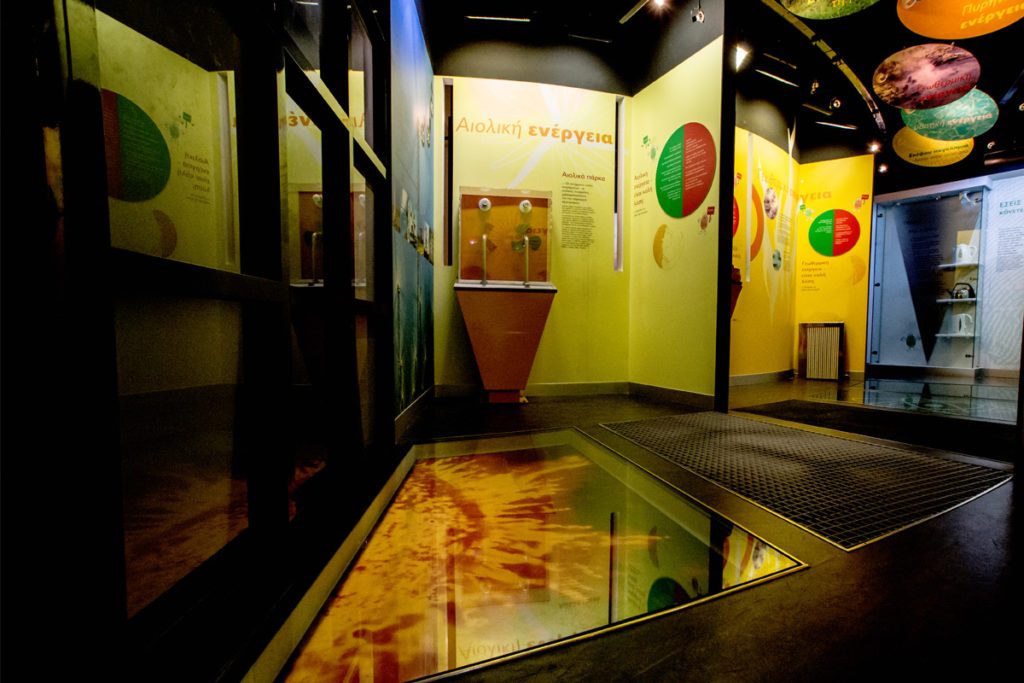