The collection of material for the first Paleontology, Mineralogy and Petrology collections of the Museum started in 1971 by the geologist Evaggelos Velitzelos, who is now a professor of Paleobotanics at the University of Athens. Works started at the Vegora basin of Western Macedonia in lake deposits of the Superior Tertiary with the collection of fossil plants, two elephant teeth found near Petres village and of three more found near Sotir village.

The mineralogy collections of the museum were mainly constituted after research in Lavrion, the most significant mine of ancient Greece with a very large number of minerals, in Chalkidiki, Crete, Serifos, Milos, Xanthi, Naxos, Paros, Thasos and elsewhere. Rock collections were constituted after research in various geological zones of Greece, such as Paxi, Ionion, Pindos, the Pelagonic and Sub-Pelagonic zone, Rodopi, and zone of Eastern Greece.

The Minerals and Fossils that have been included in the data base belong to the collection of the Museum. They include specimens from all over the world, as well as a lot of samples from Greece. The specimens have been entered with their scientific names already existing on the labels. 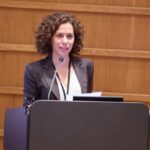 Christina Giamali is a doctor of Geology and Geoenvironments of the National and Kapodistrian University of Athens. She also holds a master’s degree in Palaeontology and Stratigraphy of the same university. Since 2017 she works in the Geological – Palaeontological and Marine Biology Departments of the Goulandris Natural History Museum.

Her research interests are focused on marine macro- and micro-palaeontology. She is currently working on molluscs and planktonic foraminifera from Neogene and Quaternary deposits. She has collaborated with the National and Kapodistrian University of Athens, the Institution of Geology and Mineral Exploration (IGME) and the Hellenic Center of Marine Researches (HCMR). She has participated in numerous palaeontological excavations, geological field trips and R/V expeditions.