‘Our work is not limited to saving the Greek natural environment. No country can be saved when the global ecosystem is out of balance. We look for a new code of values, a new ethic that will bring us to the next millennium. It is a tragic fact that, unless our life is threatened, we do not reach for global unity and cooperation.’ Angelos Goulandris, 1990

‘The management of the Earth is the greatest problem of the 21st Century. We need a new approach in the organization and management of nature. The environment will become the first priority in the relationship between states. Any other ideology will recede under environmental pressures.’ Angelos Goulandris, 1990

‘Biodiversity guarantees the coexistence of various species and the capacity of ecosystems to preserve the fertility of the soil and the microclimate, thus ensuring the sustainability of the Earth’s wealth. Furthermore, cultural diversity is the expression of man’s ability to adapt to different circumstances. Civilizations represent the solutions given by man to issues of survival in specific environments. Cultural diversity is expressed through the variety of languages, religions, farming methods, the arts, social structure, nutritional and pharmaceutical customs, and all other aspects of human behaviour.’ Niki Goulandris, 1996

‘Man’s right to a better life urges international measures for the protection of natural resources. Our return to nature must signify the revision of our way of life and our incorporation into the mechanism and economy of nature. Within the laws of nature will we discover rhythm and equilibrium, and regain the measure of our capacity for continuous creation and development.’ Angelos Goulandris, 1990 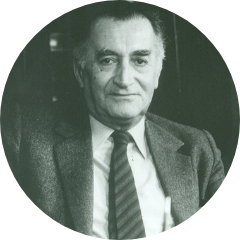 Angelos Goulandris, founder and President for 32 years (1964-96) of the Goulandris Natural History Museum, from an early age, thought of his country as a place of particular ecological interest. He was one of the first to foresee the repercussions of our time on the natural environment and to act accordingly.

In 1964, he founded the Goulandris Natural History Museum,whose mission was to promote natural sciences and the protection of the Greek natural environment, as well as environmental education. He dedicated his life to this goal, to which, beyond his financial support, he also put the stamp of his personal outlook and philosophy.

Angelos Goulandris believed that his work was a major investment for Greece, which was to be completed with the creation of the GAIA Centre.

Angelos Goulandris was awarded the Silver Medal of the Academy of Athens (1979) and the Onassis Foundation’s International Prize for “Man and the Environment” (1990). In 1988 he was nominated Honorary Doctor by the Aristotelian University of Thessaloniki.

His limited free time was dedicated to art, through which he interpreted mathematical and geometrical concepts of cosmic balance into paintings and sculptures. 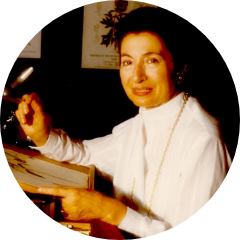 Niki Goulandris is a well-known personality: her message combines ecological principles with cultural values and she has contributed significantly in nature conservation while also promoting man’s cultural achievements. She strongly promotes the concept that the hope for the future lies in the interplay between biological and cultural processes, which would add new ethical dimensions to the understanding of human situations.

From a very early age her life has been dedicated to learning, to the generation of new ideas and scientific thought. Supported in all her endeavours, both spiritually and morally, by her late husband Angelos Goulandris, she maintained her independent spirit and inquiring mind. Her strong conviction is that the world needs a new code of values for the future if a proper equilibrium between nature and society is to be achieved.

Her beliefs have been successfully put into practice as reflected in her career and accomplishments:

1964- 96
Co-founder with her husband Angelos and Vice-President of the Goulandris Natural History Museum, an important centre for environmental research and education, in Europe.
1965-81
President of the Association of Greek Women University graduates.
1974-75
Deputy Minister for Social Services. Among her responsibilities was the care of the 200.000 refugees in Cyprus
1975-81
Deputy President of the Hellenic Radio and Television.
1980 -2004
President of the Save the Children Association in Greece.
1989-91
Deputy President of the National Tourism Organization of Greece.
1991-
President of the Greek Biotope/Wetlands Centre, a subsidiary of the Goulandris Museum.
1992 – 1996
Appointed on the board of Governors of the International Development Research Centre of Canada. (IDRC), for a three year term.
1992
Member of the Greek Delegation to the Rio Conference.
1993 – 1995
Member of the 12-member U.N. World Commission for Culture and Development under the chairmanship of Mr. Perez de Cuellar.
1996 –
Niki Goulandris, following the death of her husband, becomes President and Director of the Goulandris Natural History Museum and the GAIA Centre for Environmental Research and Education.
2002
Member of the Greek Delegation to the Johannesburg Conference.

Niki Goulandris has received international recognition and various honours and awards for her achievements:

Silver medal of the Academy of Athens.
Member of the Order of the Smile 1978 (Poland).
Member of the British Linnean Academy.
Member of the United Nations Roll of Honours “Global 500”.
Onassis Price “Delfi” for “Man and the Environment” on behalf of the Goulandris Natural History Museum.
Elected “Woman of Europe” 1991 by the European Community Commission.
Honorary Doctorate by the University of Uppsala, Sweden
Three Honorary doctorates by the Aristotelian University of Thessaloniki. (Department of Forestry and Natural Environment, Department of Agriculture and Department of Biology).
Honorary Doctorate by the University of Thessaly, Department of Pre-School Education, Primary-School Education and Education for the disables.
Honorary Doctorate by the Agricultural University of Athens.
Recipient of the “Légion d’Honneur” (officier).
Nominated as an honoree in UNEP’s 25th anniversary: “Eyes on the Environment”
“25 Women Leaders in Action” 1997.
Corresponding Member of the French Academy of Moral and Political Sciences.
Recipient of the Greek Commander of the Order of Phoenix.
Recipient of the Officer’s Cross of the Order of Merit (Federal Republic of Germany)
Member of the Academia Europaea.

Niki Goulandris travels worldwide visiting natural reserves as well as threatened ecosystems under different cultural conditions in the North and the South. Invited to lecture in Universities and other institutions, mass media, women’s organizations, etc. she has spent the past 20 years leading the campaign to promote cultural values linking nature, man and society.

Niki Goulandris has a parallel career in botanical illustration. She is a well- known botanical painter, having painted about 800 Greek indigenous plants, many of which have been printed. Her botanical paintings dedicated to the preservation of the Greek flora adorn porcelain of Limoges and Royal Copenhagen and silk scarves for Hermès.